There has so far been a reasonably steep learning curve, but the Open SAP course Introduction to Software Development on SAP HANA, by Thomas Jung has been helping with this situation.

Today however, I encountered an issue which stopped development for several hours whilst I fruitlessly searched for assistance.

I had been developing normally when HANA Studio, which is based on Eclipse, encountered an error and crashed. When I tried to re-open, the application froze on the launch splash screen whilst "Loading workbench" was displayed on the screen. When Windows reported Java had crashed, a dialog message was popped up, but behind all other windows. The dialog message looked like this: 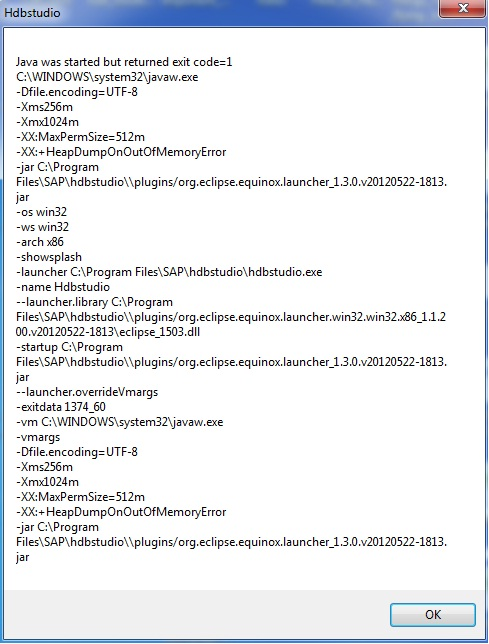 Many Google searches lead to the SAP forums where the only advice involved amending the initial amount of memory allocated to HANA Studio in the hdbstudio.ini file. This did not solve my issue. Nor did various combinations or uninstalling and reinstalling both HANA Studio and Java JRE.

In growing desparation, I began to look for Eclipse specific help on the off chance that it was an Eclipse related issue which I could fix. It was then that I came across the post Recovering a corrupt Eclipse workspace which seemed to be about resolving an issue very similar to the one I was experiencing.

The folder which the above article suggests that you delete the contents of is located within a different directory when used by SAP HANA Studio as opposed to base Eclipse.

Within Windows at least, the folder can be found within:

I deleted the contents of that folder and magically SAP HANA Studio opened successfully again. The only further steps needed were to navigate back to the repository and check out the projects that I had previously had within my workspace.

I hope this saves somebody else several hours of their life troubleshooting.

We run sets of Virtual Machines (VMs) within Windows Azure which run our client facing web applications within IIS.…

HttpClient: A Silverlight WebClient Alternative With Cancellation and Timeout Support

Ever since we switched from WCF RIA Services to a ASP .Net Web API for supplying data to our…