In one of my previous posts, I blogged about how I had built a prototype standing desk to try and make my life healthier and reduce the overall time I spent sedentarily sitting down.

The initial prototype was very rudimentary, basically my computer tower and two disused speakers as monitor stands; and a couple of cardboard boxes and lever arch folders to raise the keyboard and mouse to an acceptable level.

This worked pretty much fine for several weeks but there were a couple of issues which began to grate on me.

Firstly, the top edge of the cardboard box beneath the front of the keyboard was gradually beginning to collapse under the stress of my wrists leaning on the keyboard and I didn’t have any more boxes available to replace them.

Related to this was the fact the surface where the keyboard sat was only as big as the keyboard. This was an issue for me as I spend a large amount of my time thinking up solutions to problems and while I do this, I like to lean on my desk. This was impossible with the first prototype due to the lack of free space and the inherent weakness of the box.

Finally, there was nowhere to put my notepad which I use frequently for taking notes about the things I am currently working on. It was becoming annoying to have to turn around and bend down to the original height of the desk to write a quick note.

As these things were annoying me, a potential solution appeared to me at home, in the shape of an IKEA Lack Coffee Table which was no longer being used and was taking up considerable space in my lounge.

A quick measure up and I found the coffee table was almost the perfect size to fit on top of my desk and the height was almost exactly what I was looking for. However, I soon realised that just placing the coffee table directly onto the glass surface of the desk would be a recipe for disaster as leaning on the coffee table would result in the whole setup sliding straight onto Pat’s desk behind.

This issue was solved with a quick trip to Halford’s for a rubber non-slip car dashboard mat. I simply cut the mat into quarters and put a piece under each leg and the weight of the table holds everything stable.

You can see the result in the picture below: 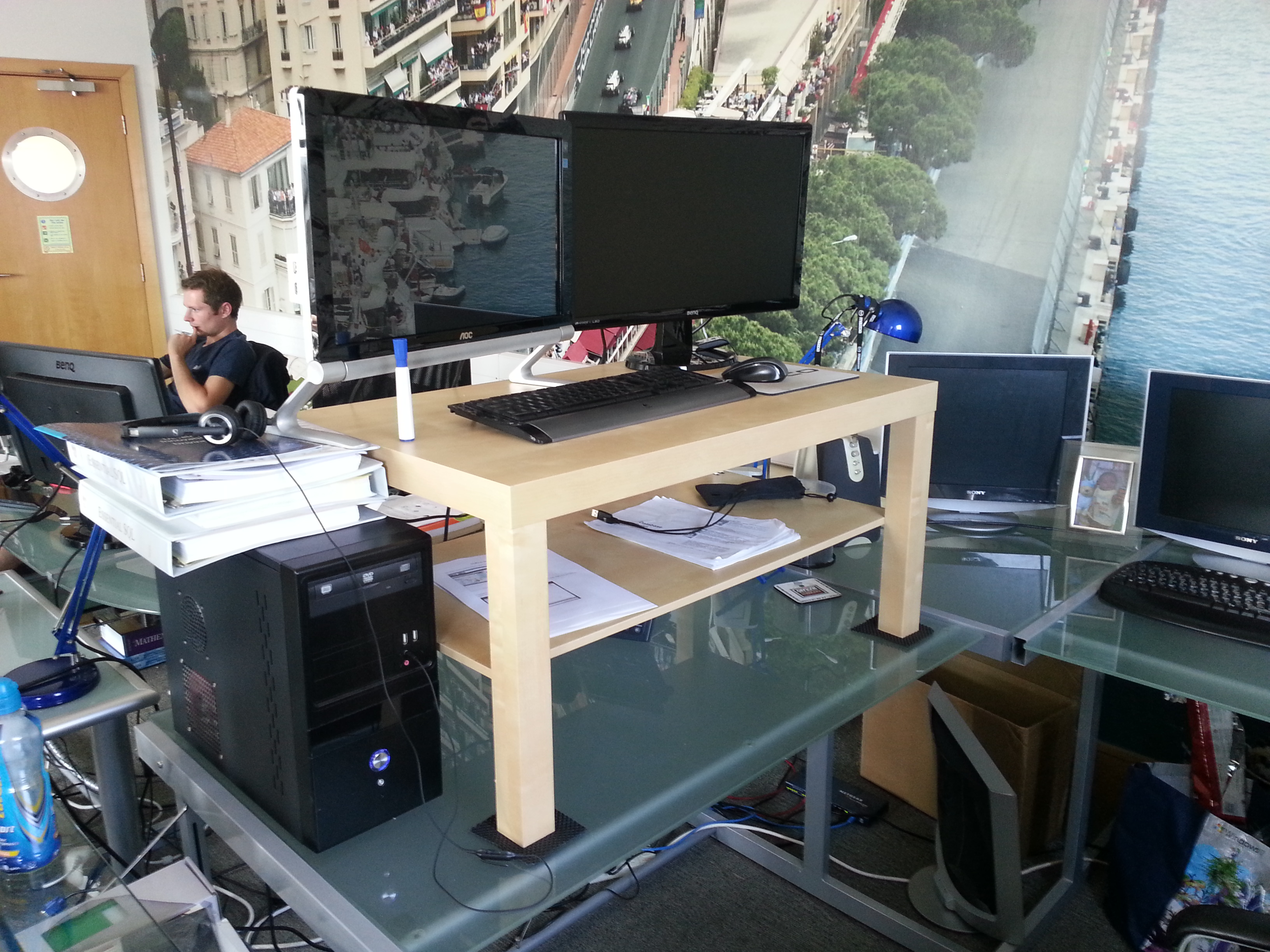 Having used this now for the best part of a month, I can safely say this is a significant upgrade to the first prototype and solves all of the issues mentioned above. The shelf under the table also adds extra storage space within easy reach.

On the health side, I definitely feel healthier and more active and have even lost a couple of pounds, which, while not being an intention is a welcome side effect. I do think that a bar stool or similar type of seat would be an advantage to allow regular short seated breaks while being able to continue working.

I am definitely intending to carry on standing up and with a move to a new office imminent, I’m looking forward to hopefully being able to get something more permanent and purpose build. Overall, I would recommend trying a standing desk out for at least a few weeks in order to get past the initial tired legs and as I hope I’ve shown with these couple of posts, is relatively inexpensive and easy to improvise a temporary solution before having to shell out for a purpose built alternative.

We Predict Innovation in the News

This post was written by Ben Clark. It’s always fun to be in the news! This week we’…